All Collections
Other FAQ
My Safe transaction failed but Etherscan reports "Success" - why is that?

My Safe transaction failed but Etherscan reports "Success" - why is that?

Written by Tobias Schubotz
Updated over a week ago

An exception can have various reasons. Examples include the usage of an opcode unknown to the Ethereum virtual machine or a failed access check programmed in by a smart contract developer (cf. error handling in Solidity).

Whenever an exception occurs, there are generally 2 options:

The latter option is what is used inside the Gnosis Safe smart contracts.

A Gnosis Safe transaction can generally be separated in 2 parts:

The reason for that separation is that the Gnosis Safe supports so called meta transactions. This essentially enables decoupling owners and signers of an account from the actual executing account. If enabled, the executing account is paid with funds from within the Safe. The owners and signers of a Safe do not necessarily need ETH on their accounts.

The fee payment part of a transaction should never fail even in case the actual user transaction fails for whatever reason, since transaction fees on Ethereum have to be paid even for failed transactions.

Let us consider this transaction. It was attempted to transfer 1000 DAI from a Safe to itself even though it only had a balance of approx. 2 DAI. That should obviously not be possible. 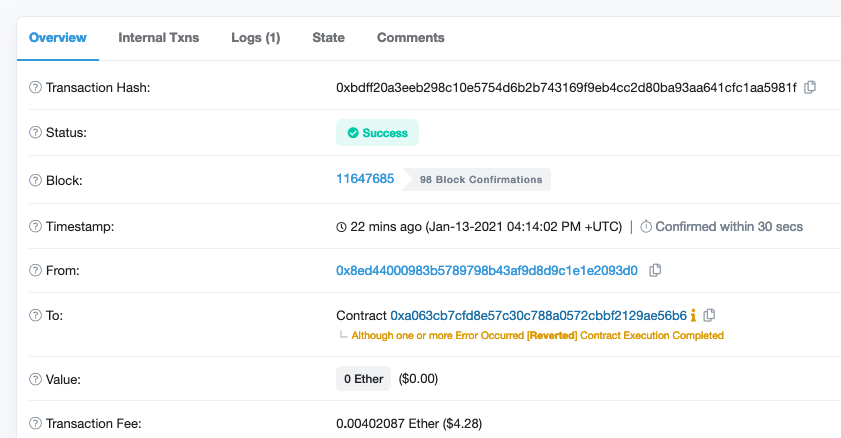 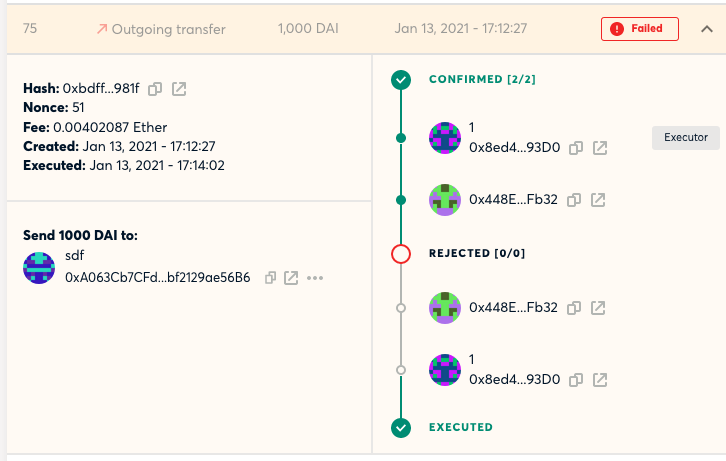 Both is true in its respective context for the reasons described above. However for Gnosis Safe users, "Failed" is more accurate since the actual intended action of transferring 1000 DAI did not succeed.

In order to figure out the actual reason, why a transaction failed, you will have to check the contract and potentially the execution trace. This requires technical knowledge.

Tenderly is a good tool for this. It reports that there is insufficient DAI balance, just as expected.

Did this answer your question?